A small brown butterfly, with a defined white line, black spotted markings, and an orange band edged with a white fringe, on the under-wings.

Like all Hairstreak Butterflies the Black Hairstreak prefers a sunny position more often than not above head height. Occasionally though they may be seen descending to nectar on bramble or other seasonal blossom.

The upper wings are rarely seen except in flight. 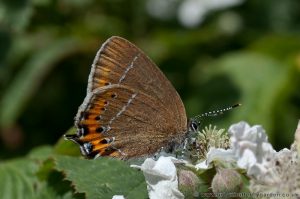 Blackthorn, a Native Shrub in Hedgerows across Britain