The silver-studded blue is a small butterfly, similar in appearance although slightly smaller than the more regularly seen Common Blue (Polyommatus icarus).

The upper-wings of the male are purpleish/blue, with a  border of black on the outer margins.  The female is dark brown, with a dusting of blue scales, and orange spots around the margins of the wings.

Silver-studded blue butterflies are single brooded, emerging and on the wing in mid June, they form a close colony, most colonies contain just a few hundred adults, although in an area with plenty suitable habitat, there may be more than one colony.

Localised but widespread the Silver-Studded Blue mainly found across the Southern counties of the UK, Norfolk, Suffolk, Cornwall, Devon and Wales. 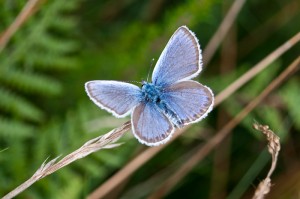 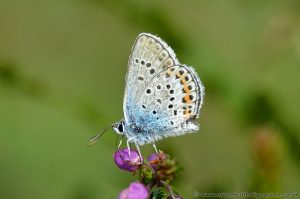