The most unusual looking of all British butterflies the Brimstone Butterfly can sometimes be seen as early in the year as February, although it is mostly seen May-June after emerging in late spring from its winter hibernation.

The male Brimstone is an unmistakable Bright Yellow Butterfly, when seen in flight, the female is similar in size and shape but much paler in colour sometimes mistaken from a distance for the Large White Butterfly.

The Brimstone butterfly can be found in a broad range of habitats such as open woodlands, parks and gardens mostly on bright sunny days.

Its most unusual wing shape, gives the Brimstone the perfect camouflage from predators when nectaring or hibernating. 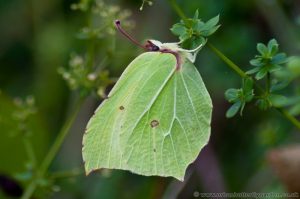