Ribwort Plantain or Narrowleaf plantain as it is also known is a Widespread Perennial across the British isles, commonly found in a wide range of habitats such as Meadows, tracks, rough ground and is often seen as a weed garden lawns

Mature plants grow to form a rosette of long and narrow dark green ribbed leaves. The flowers are cylindrical on long stems and may be seen April to September. 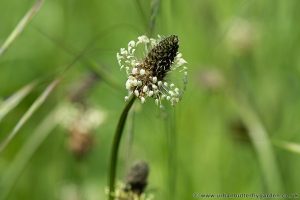 Ribwort Plantain in flowering in June

Where to find Ribwort Plantain

Generally Plantains (Plantago.ssp) are particularly drought tolerant and most often found growing in undisturbed and compacted calcareous (alkaline) soils. Adding plug plants or seeding an area with Ribwort Plantain should be considered in the early stages when creating and establishing a wildflower meadow of any size.

Ribwort Plantain can be grown from fresh seed with the right conditions almost any time of year if required. Planted in moist free draining seed compost, in a covered tray or window sill propagator, pre soaked seed may germinate in as little as 4-6 days. Plant on when large enough to easily handle in to pots, so the first pair of leaves are just level with the soil 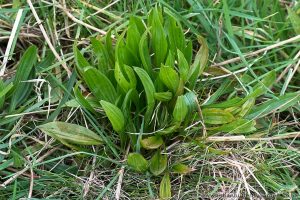 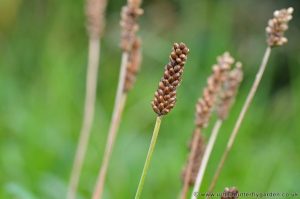