A wild perennial herb, with light yellow, orange lipped flowers, that are similar in shape to that of the garden Snapdragon (Antirrhinum).

The flowers appear from June to October, at the top of a straight upright stems. The stems are quite noticeable even before the flowers have appeared, by their long thin grey-green leaves, that grow up the stem in opposite pairs.

Bumblebees, and some Butterflies like the Small Skipper (Thymelicus sylvestris) are often attracted to Toadflax as they are strong enough to get tongues deep inside the throats of flowers and get to the nectar, aiding pollination. 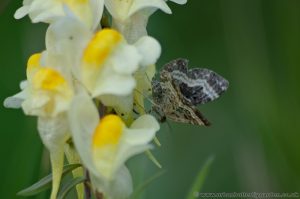 Toadflax with an unidentified Moth on flowers 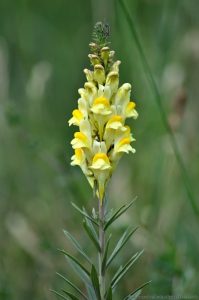