The Meadow Brown butterfly is probably one of the most common and widespread of all butterflies, seen throughout the UK. On the wing from June – September, it can often be found in many different types of grassy habitat such as, open woodland rides, roadside verges, meadows and even gardens.

This butterflies upper-wings are dark brown with a black eye spot and a band or light orange patch on the fore-wings, these markings are far less prominent on the male which also has a slightly smaller eye-spot. 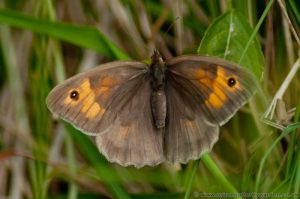 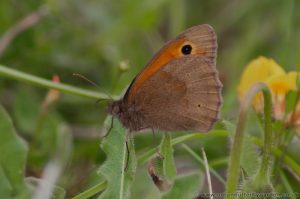 The underside of the fore-wing is mainly orange with a black eye-spot while the hind-wing is mottled brown.

During cool weather or as the temperature falls towards sunset, the Meadow Brown will climb down and rest amongst the lower stems of tall grasses.

If disturbed before dusk they will often take flight and may flutter some distance before finding a suitable place to rest again. 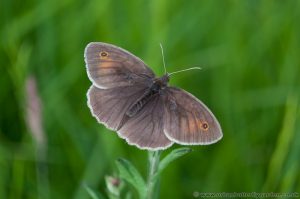