An unusual looking brown wild plant, and parasite of the plant Greater Knapweed (Centaurea scabiosa), mainly found on calcareous (alkaline) soils in the Southern and Eastern areas of the UK.

Unlike most other plants the Knapweed Broomrape lacks any chlorophyll, so has no green leaves, unable to photosynthesise, it is dependant on taking all its nutrition from the roots of the host plant.

Instead of green leaves Knapweed Broomrape has “Scales” inside which small yellow flowers appear June – July, which are pollinated by bees and other insects. 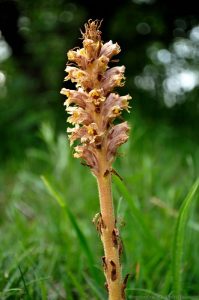 Knapweed Broomrape a parasitic wild flower of the Greater Knapweed