The Marsh Fritillary Butterfly is mostly found locally on the western side of Britain, with the main concentrations of colonies in the southern counties, Wales, and reaching as far north as southern Scotland.

On the wing from May with numbers peaking in June, the Marsh Fritillary as it’s name suggests prefers damp Meadows or Marshy Ground where the Wildflower Devils-bit Scabious grows. It is only active on warm sunny days, often flying low to the ground.

It is also the most colourful of all the fritillary butterflies its upper wing and lower wing are beautifully marked with orange and yellow transverse bands.

After mating the female typically lays her eggs on Devils-bit Scabious, although it is known that the larvae will also eat Honeysuckle. The larvae hibernate during the Winter months waking again in spring. They feed close to the base of the food plant and pupate in April. The butterflies are usually seen in May. 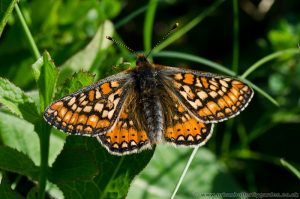