The Large Skipper is a small fast flying butterfly often seen till disturbed from it sunny perch, from late June through July. Despite its small size it can be commonly found in almost every county of England and Wales, stretching as far northwards as Ayrshire and Northumberland

Found in a varied range of grassy habitats the Large Skipper prefers those in a sunny sheltered spot, where grasses like Common Couch and Cock’s foot are found and left to grow tall. It’s varied range of habitats can often include Woodland edges and paths, Hedgerows, Roadside Verges, urban gardens and even parks. 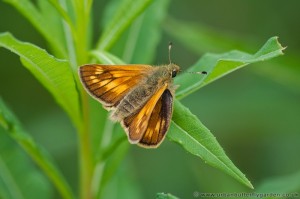 The males are darker in colour than the females with a distinctive black sexual mark or brand on the upper wings. The females have a lighter row of golden spots on the wings. Under-wings are a light brown or buff with small yellow patches. 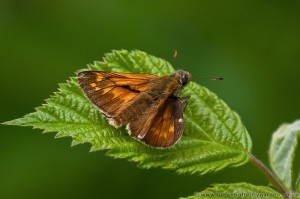 Large Skipper butterflies may be found perched in a sunny position, on a tall wild flower or on a bramble leaf, leaving occasionally to feed quickly skipping from one flower to the next.

The males wait for passing females they are particularly territorial and will quickly chase away rival males, other Butterflies, Bees, Dragonflies, and just about any other insect that unknowingly strays into its territory.

The upper sides of the wings of both sexes of the Large Skipper are an eye catching golden yellow and brown. 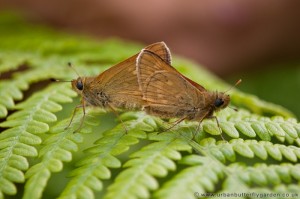