A widely spread butterfly the Wall Brown is generally found in South Eastern and Western counties of Britain, where, it may be seen patrolling its territory or basking in the sunshine on patches of open ground, tall plants and of course walls.

The adult Wall Brown emerge from two broods a season, to form small colonies, the first is May-June and a second slightly larger brood July-August.

The upper-wings are light orange with grey/brown veins and lines there are also a single black-eye spot on the fore-wings and of the hind-wings. 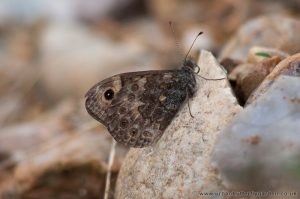 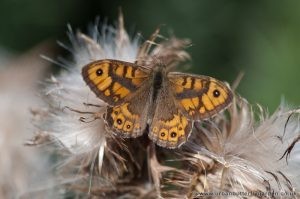 The Wall Brown is part of the Nymphalidae Group of butterflies, more commonly referred to as “Browns”, in Britain this group of species includes:- the Small Tortoiseshell, Peacock, Meadow Brown, Gatekeeper, and the rare Purple Emperor, to name but a few.

It is so sad that this, once fairly common little butterfly, is in such decline across much of inland England and Wales, it is now found mainly around coastal regions. 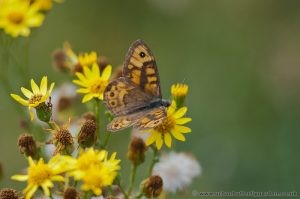