Red Campion is a semi-evergreen perennial wildflower. It’s early pink /red 5 petalled blooms may be seen from late March in the garden normally April onwards. It is most commonly found growing locally on well drained calcareous soils and maybe be seen along hedgerows, field margins, and woodland rides.

Despite only being found locally in the wild it is quite a common species to be added into Wildflower seed mixes. Planted in a wildflower garden alongside a fence or hedge in semi-shade, it is a perfect plant for pollinators such as Bees, hoverflies, butterflies, and moths 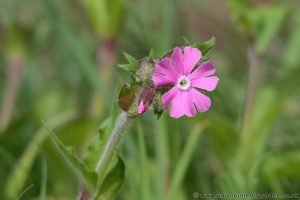