Oxlip (primula elatior) is a spring wildflower of shady sites. It is not to dissimilar in appearance to another Primula the Cowslip (primula veris) but with paler yellow flowers similar shaped to the Primrose (Primula vulgaris).

Modern agricultural practices and the lack of woodland coppicing have all played their part in restricting the range of where the oxlip can be found growing in the wild. They are now mostly found locally on a small number of sites in East Anglia where they can often seen in large numbers.

However despite their decline in the wild, Oxlips will grow happily in most gardens that have alkaline soil, preferring a similar shady habitat to the wild Primrose (Primula vulgaris) they can be sown from seed or bought as plug plants

The importance of early spring flowers

Whether growing wild or planted in the garden early wildflowers such as Oxlips and other Primulas which bloom from March to late May, can provide a rich nectar source for early spring Butterflies, Bees and other insects 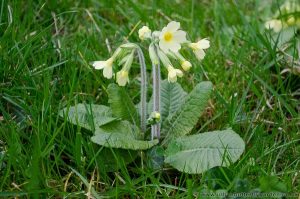