A small butterfly, with spotted patterned markings of dark brown and white, edged with a white fringe, on the upper-wings, and mostly seen from May to June although in certain years it may be as early as mid April.

The Grizzled Skipper is well camouflaged and sometimes difficult to see it can sometimes be found along with the Dingy Skipper Butterfly (Erynnis tages), and although both butterflies share the same habitat and similar flight times, they do not share the same food plants.

On sunny days Grizzled Skipper Butterflies may be seen basking in the sun, usually up off the ground, choosing to rest on an old knapweed seed head or stems of long grasses. 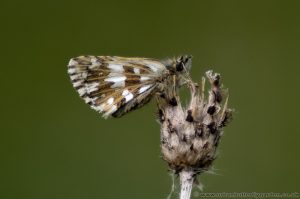 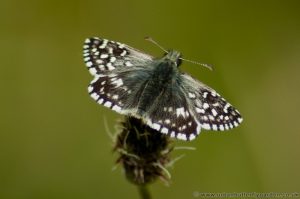