Cuckoo Flower (Cardamine pratensis) is a herbaceous early Spring perennial, with delicate lilac or violet tinted flowers with obvious dark violet veins, and yellow anthers on a sturdy stem, varying in size to around 40cm long, seen from April to June. The leaves are a basal rosette, with 8 pairs of oval leaflets

Widespread but localised, throughout many areas of the UK, Cuckoo Flower where found, often grows in abundance, preferring, wet or damp grassy meadows, and similar locations ranging from lowlands to mountains. 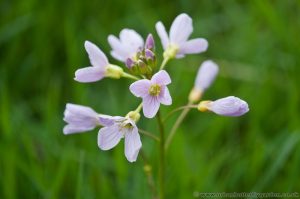 Cuckoo Flower or Lady’s Smock as it is also known, like other early wildflowers provides a nectar source for Butterflies, Bees and other insects in early spring, making it a great addition to a wild flower or wildlife garden. It is also an essential larval food plant for the strikingly coloured Orange-tip Butterfly.