An evergreen shrub or bush with shiny dark green leaves, with light yellow-green margins and prickly edges, often used as a single ornamental shrub, or as a hedge in urban gardens and parks, it can also be found in the countryside growing in hedgerows, and woodland clearings.Flowering May – July, the small groups of white petalled flowers, attract butterflies, moths and other insects, the berries or fruits which follow turn bright red in the Autumn, which although toxic to humans provide a winter food source for many species of wild birds and animals. 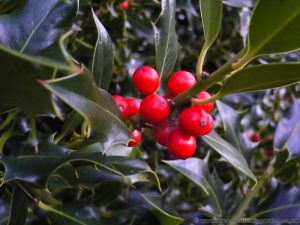 Holly (Ilex) has been considered a sacred shrub, deeply associated with Winter since ancient times, a tradition still followed today, its branches used to make to traditional Christmas decorations, like wreaths and table decorations. 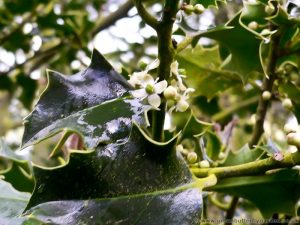