A small rare butterfly, the Brown Hairstreak spends most of its time fluttering round high in the tree tops of a chosen Ash tree, often referred to as the Master Tree.

Most active on warm sunny days, both the male and female Butterflies may occasionally come down lower to nectar on bramble or other flowers, although the female is the most likely the one to seen close up, as she flies around to find a suitable site to lay her eggs.

Upper-wings are brown with orange patches on the fore-wings, under-wings orange/brown with two white lines or streaks. 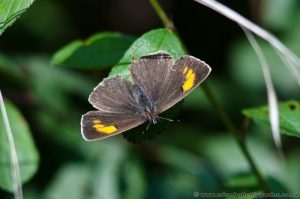 The Brown Hairstreak is a priority species for conservation, due to continued habitat loss. The use of mechanical hedge cutting or flailing in late summer and Autumn damages hedgerows making them unsuitable for the female butterfly to lay her eggs, also cutting away previously laid eggs that will hatch in the following spring. 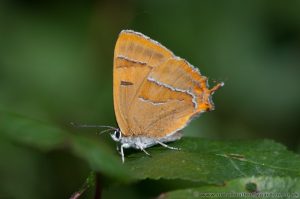