Widespread in mainland Britain and parts of Ireland, the Common Blue is considered as its name suggests the most commonly found species from the 20 Lycaenidae (blue) group of butterflies in the UK.

Seen from April-September emerging in several broods.Common Blue Butterflies are found in a wide rage of habitats including, grassy meadows, bridleways, roadside verges, heathland and on urban waste ground, most often seen, perched up off the ground, on a tall wild flower or grass stem. 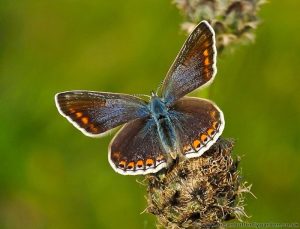 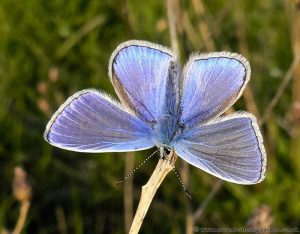 The upper wings of the male common blue are violet blue with narrow black margins and white fringes unlike the female’s which are brown, tinted with blue scales with orange crescents on the outer margins of the fore-wings and orange crescents with black spots with on the margins of the hind-wings.The under wings of both the male and females are brownish grey with black and orange spots. 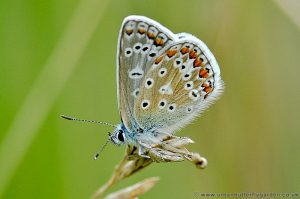