Widespread across Southern and Central Britain, Wales and as far North as Scotland, usually seen from the beginning of April through to June.

The male Orange-tip butterfly, is quite striking in flight with an orange patch on the outer half of the fore-wings, and black wing tips.

The female however lacks the orange patch on the fore-wings but both share marbled-green under-wings, black wing tips and a black spot on fore-wings.

Often found in a wide range of habitats, Orange tip butterflies can be seen anywhere, from country lanes and forest paths, to gardens and parks. Particularly active on warm sunny spring days, they fly close to the ground, stopping briefly to nectar before continuing. 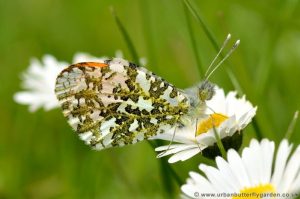 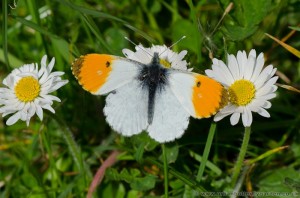