A native wild annual herb Plant, with small delicate violet purple flowers, that can be seen from April – September, often found growing on grassy meadows in hedgerows and gardens.

Common Vetch can also be identified by the noticeable long thin branching stems and oval leaves, which are made up from 3 to 8 pairs of leaflets, on the ends are thin tendrils which it uses to climb surrounding plants. 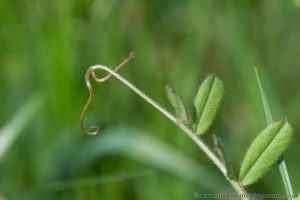 The Tendrils on end of Leaves, help Common Vetch to climb neighbouring plants

Common Vetch as a Cover Crop

In some countries Common Vetch is grown as cover crop for agriculture, often referred to as “Green Manure” and used as a natural way to enrich the soil with Nitrogen. It is also used for its qualities in suppressing weeds in cereal crops, vineyards and Orchards. 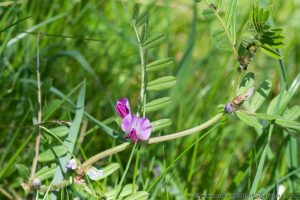