The bright yellow flowers are kidney shaped woolly and quite distinctive and borne in pairs on leafy stems. They are a rich source of nectar for many insects from May to September. The leaves are pairs of leaflets with a silky-hairy underside

When introducing Kidney vetch from plugs or pots, ensure good drainage if needed, by adding sharp sand to the soil in the planting hole and around the area of the base of the plant. 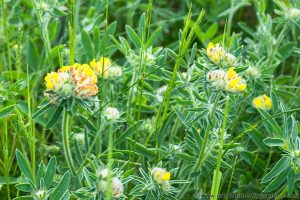