Probably the commonest white butterfly in the UK, the Large White is often seen in a wide range of habitats, such as Urban Gardens, Parks, Hedgerows, Meadows, Roadside Verges and Allotments, sometimes from as early as April. Numbers peak in July-August, sometimes topped up with migrant Butterflies from Mainland Europe, which then slowly fall away till October.

The large White is part of the Pieridae Group of butterflies, in Britain this group includes:- The Small White, Orange Tip, Green-veined white, Brimstone, Wood white, and the regular summer migrant The Clouded Yellow.

Also known as the “Cabbage White” a name which, the Large White shares with its close cousin, the Small White Butterfly, a name given solely for its reputation, than anything else. 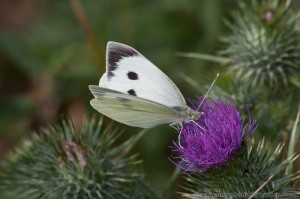 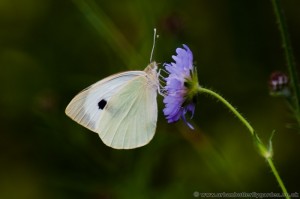 The caterpillars or larvae of the Large White Butterfly, often use the (Cruciferae) Group of plants as a food source, this group includes, the Mustard and Cabbage family of plants. Unfortunately for gardeners, the small caterpillars sometimes cause, untold damage to unprotected cabbages, in vegetable gardens and allotments across the country.

The upper-wings of the male are white, with Black tips and black spots on the fore – wings . The under-wings are pale yellow.