Flowering March-May the bright yellow flowers are an important early nectar source for insects the leaves are glossy dark green and heart shaped.

Also known as Pilewort it is sold as a dried herb and used in the treatment of certain skin complaints. 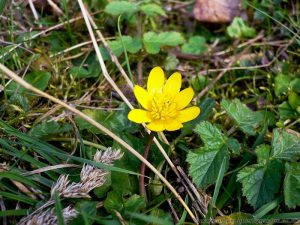 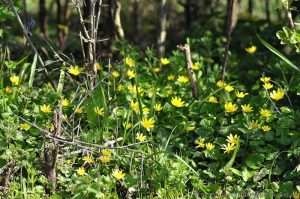 The lesser Celandine is also known as persistent garden weed, but despite this reputation this bright yellow wild spring flower was an inspiration for William Wordsworth who liked them so much wrote a number of poems about them, “To the Small celandine”, “To the same flower” and “The Small Celandine.

There is a Flower, the lesser Celandine,
that shrinks, like many more, from cold and rain;
And, the first moment that the sun may shine,
Bright as the sun himself, ’tis out again!

When hailstones have been falling, swarm on swarm,
Or blasts the green field and the trees distrest,
Oft have I seen it muffled up from harm,
In close self-shelter, like a Thing at rest.

But lately, one rough day, this Flower I passed
And recognised it, though an altered form,
Now standing forth an offering to the blast,
And buffeted at will by rain and storm.

I stopped, and said with inly-muttered voice,
“It doth not love the shower, nor seek the cold
This neither is its courage nor its choice,
But its necessity in being old.

“The sunshine may not cheer it, nor the dew
It cannot help itself in its decay
Stiff in its members, withered, changed of hue.”
And, in my spleen, I smiled that it was grey.

To be a Prodigal’s Favourite–then, worse truth,
A Miser’s Pensioner–behold our lot!
O Man, that from thy fair and shining youth
Age might but take the things Youth needed not!