Small and fast flying, the Dingy Skipper Butterfly with it’s brown and cream mottled markings, is well camouflaged into the grassy surroundings. It can often take flight and blend in so well, at times can be difficult to spot.

Widely spread across the southern half of Britain, Dingy Skippers are most often found on open chalk or limestone grassland, and are on the wing from the last week of April into June. 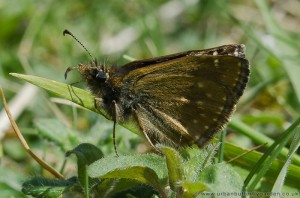 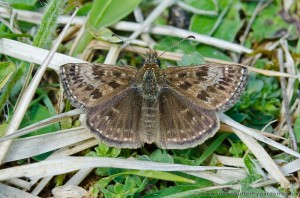 Seen from a distance both butterflies may be mistaken for day flying moths such as Mother Shipton, (Callistege mi), which also shares similar flight times and habitat.

During sunny weather, Dingy Skipper Butterflies enjoy basking in warm sunshine, perching up on the old flower heads of Knapweed, or on tall dry grasses, if it is overcast or a cool breeze, they may choose a more sheltered position on the ground. 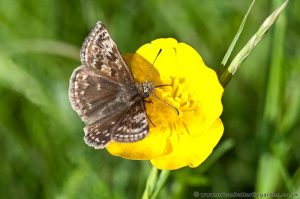