Brambles is often a name referring to the native blackberry bush, a thorny perennial plant that can often be seen growing wild amongst hedgerows and in gardens and woodland. It is able to tolerate even poorest soil types, and if left unchecked, often spreads, covering large areas of ground.

Its distinctive growth of long ‘biennial stems’ also known as Canes, these are covered along their length in sharp spines or thorns. In late Spring/early Summer stems of white petalled flowers appear from the canes attracting many species of butterflies, and other insects like hoverflies and bees. 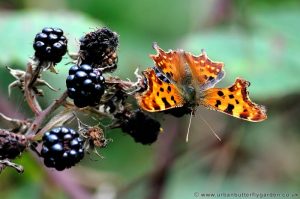 The blackberry is one of a group of more than 350 different species found around the world, these include raspberries, cranberries and loganberries.

There are also many hybrid varieties available specifically for the garden, some of which like ‘Black Diamond’ and ‘Black Pearl’ even have thorn-less canes.

As the flower petals fall away first signs of the green fruit begin to appear, growing in size during the summer and turning from red to black when fully ripened in the Autumn. 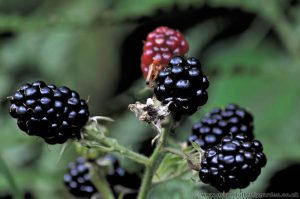