The Common Snowberry Bush is best known for it’s pure white berries in Autumn. It is possibly, the most well known, of all the varieties, commonly grown in gardens and found in town parks and other urban planting schemes.

Possibly the most well known, and commonly grown of all the Symphoricarpos (Snowberry) varieties, most noticeable in Autumn and late Winter in gardens, parks and other places for its display of decorative pure white berries.

Common Snowberry ‘Albus’ is a hardy deciduous shrub with long slender stems and oval leaves. The small delicate pink and white bell shaped flowers begin to appear in June, planted in full sun they are particularly attractive a wide variety of insects such as bees, hoverflies and maybe even the occasional Holly Blue Butterfly.

The leaves turn yellow before falling in Autumn, leaving behind the fleshy white berries which often remain on the bush from September to January. 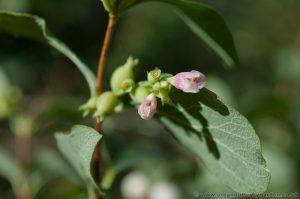 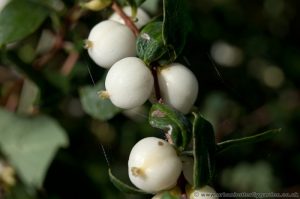 Like most varieties of snowberry, they are best grown in good light, but will happily tolerate and brighten a dark corner of the garden, whether grown as a border shrub, or for its exceptional sturdiness for easy maintenance hedging.

Sorry, the comment form is closed at this time.