Urban Butterfly Garden emerged on-line in January 2010, it was originally just an idea based on a few photographs and many pages of observations and notes, that I had taken for a few years (possibly around 15 or so) about some of the plants, Butterflies and lots of other wildlife that visited or called my garden home. 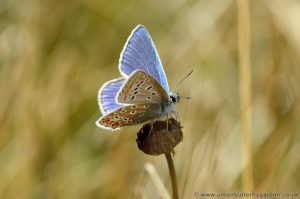 How it all Began.

I had also began to notice that apart from some of the reserves I regularly visited, the countryside with its thousands of acres of arable farmland surrounding my home held very little in the way of permanent or stable habitat for pollinators and other wildlife.

In 2006 the chance sighting of a female Common Blue butterfly in the garden led to the discovery in 2007 of a small colony which were thriving on the Black Medic they still present to this day, the seed for Urban Butterfly Garden was planted

Since that time many more wild flowers and nectar rich cottage garden plants have been added or self set into the once lawn area and garden borders, in fact almost all the shrubs and plants that can be found on this website are growing there.

It has taken a few patient years to mature and become established, to work out a plan of maintenance and the wildlife to naturally arrive. Amongst the many surprises, are the different species of small bumblebee, common lizards, and moths like the Mint and herald. The last two years has seen greater numbers of emerging Meadow Brown, Ringlets, Gatekeepers (hedge brown) and in 2014 the first Brown Argus

Finally we would like to say thank-you to everyone who has purchased items through the links found on urban butterfly garden. Each purchase generates a small amount of income paid by the advertiser T&M or Yougarden which helps us with the maintenance and upkeep of the site.

I hope you enjoy browsing